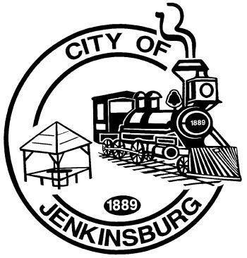 Transcribed from an old city scrapbook.

From the best available information it appears that Jenkinsburg derived its name from the family of W.H. and Nancy Jenkins, who resided here in the early 1880's

Their former home being one of the oldest residences here until it was destroyed by fire in 1974. Mr. Jenkins operated one of the first stores here.

The town was chartered on October 24th 1889. The little frame one room Court House stood near where the Baptist Church now stands.The first train that passed though was a Southern R.R train in the early 1880's. The small frame depot stood near where the present Post Office now stands. Meeting the train on Sunday afternoons was considered regular recreation for the boys and girls of the day.

The first school in the community was held in County Line Baptist church, with the first teachers being Mr. Gus Bankston, Mr. News Harmon and Mr. Willis Mangham. Some of the first stores and businesses operated here that are remembered by some of the older residents were Mr. W.H. Jenkins and Mrs. Sarah Bankstones stores in early 1880's. The Bankston store was a little frame store and was operated approximately between 1882 and 1897. Mr. Sam Colvin operated a store in late 1880's.Later other stores and businesses approximately eight at one time made up the town. The owners and operators of other stores were Mr. W. J. Bankston, Mr. Mac Bankston, Mr. T.A. Steele, Mr. Billy Childs, Mr. Johnsie Childs, Mr. Jim Benson, Mr. Billy Thurston and Mr. John O. Minter.

During the peak of thriving business there was a sizable lumber yard and two gins that operated as long as cotton was grown extensively. There was also a large warehouse and a furniture store. There was a soda fountain operated in one of the  larger stores.

The earliest home built here were the J.W. (Billy) Childs home presently owned and occupied by Mr. and Mrs. F.W. Childs, where they operated the Childs Nursery. They hybridize and shop hemorcallis from coast to coast. The home presently occupied by Mr. and Mrs. R.A. Allen and is one of the oldest now standing. Another of the oldest now standing was built by Mr. W.M. Robert Minter and presently owned by Mrs. Sarah Ruth, Harris Peak of Macon.

There were three doctors here in the late eighteen hundreds. They were Dr. J.W. Harper, Dr. B.F. Aiken and wife Dr. Tommy Barron Aiken. Mrs. Aiken was the first woman from the south to attend the Medical College in Atlanta. She finished school in 1893; she married Dr. Aiken in 1894 and moved to Jenkinsburg. He graduated in 1899. They both practiced medicine here until her death in 1928. Their first mode of travel was by a two wheel cart. They lived in Jenkinsburg until her death and in 1931 the home burned and Dr. Aiken moved to Jackson. Mrs. Lucile Aiken Jolly, their daughter and Mr. Arthur Bankston are probably the oldest citizens living today who were born and reared in Jenkinsburg.

Back in the most prosperous days of the town there were two banks here. The Farmers Banks, with Mr. L.O. Benton as President and the Bank of Jenkinsburg with Mr. Frank Etheridge as president. The Farmers Bank was the only Bank in the County that could reopen after the crash without reorganization. Mr. Howard C. Childs was Cashier. They later moved to Locust Grove where it now stands and the new bank building has just recently been moved into.

The large brick school building built here in the early nineteen hundreds was sold to The Assembly of God Church and used as a Camp Ground until 1959 when Rev. S. J. Westbury bought it and converted it into a Nursing Home. It has been enlarged several times with two wings being added and now is a Medical Care Home that accommodates two hundred patients.Besides the Childs Nursery, the Westbury Medical Care Home, the only other business that stands here now is the large Display room and Warehouse of Cleveland Carpet Company, owned by Edward Cleveland.